The REAL Story behind HER Story

The three SECTIONS below are the most CRITICAL,  because they outline in complete detail Tianna Bartoletta’s FABRICATED LIES.

SECTION
THE SET UP

The 2021 Goal: Make the Olympic Team and release her New Book There is an enormous amount of self-promoted content out there, about Tianna, but this second article will bring the REAL story FULL CIRCLE Taylor Dutch, an unscrupulous writer for FLO Track was the FIRST in August 2017 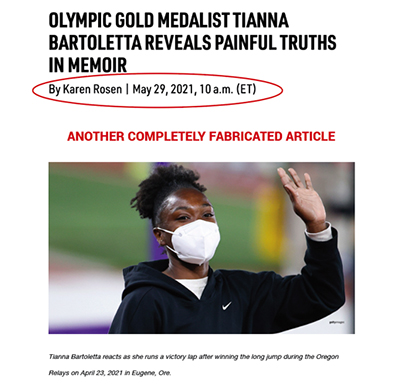 Karen Rosen, is the SECOND other unscrupulous writer for TEAM USA The Book Survive and Advance comes out What we don’t understand? Here are the ACTUAL writings that were authored by Tianna in 2015 There are a few question people keep asking after reading these documents This is ACTUAL TRUTH about Tianna Bartoletta
✕

“The reality is, that wasn’t my reality. I became exhausted, tired, and lonely continually projecting such a different persona than I actually possessed that I resigned myself to focus on just one thing.”
Fullscreen Mode

“I allowed people to believe I was open and happy. I was able to convince thousands of people online that I was living a fabulous life, that my posing for seductive pictures using a self-timer equipped camera in my college apartment was about self-love, not a lack of self-respect. I was able to fool the half-interested masses into believing I had a plan for my life, that I had my shit together and I had the most supportive family and friends to make all of my dreams come true. The reality is, that wasn’t my reality.”

Letter of Commitment to Nike

Tianna Bartoletta REVEALS the TRUTH within this email. This email is completely FACTUAL and was written solely by Tianna.

Narcissistic Personality Disorder (NPD) is defined as behavior characterized by self-centeredness, lack of empathy, and an exaggerated sense of self-importance.

The disorder causes significant impairments in personality in terms of functioning and is accompanied by a number of other pathological personality traits such as Pathological Lying. As with other personality disorders, this condition negatively impacts life in various areas, including social, family, and work relationships.

Some of the symptoms associated with NPD include:

People with narcissistic personality disorder are typically described as arrogant, conceited, self-centered, and haughty. Haughty: Blatantly and disdainfully proud. Having or showing an attitude of superiority and contempt for people or things perceived to be inferior.

Because they imagine themselves as superior to others, they often insist on possessing items that reflect a successful lifestyle.

Despite this exaggerated self-image, they are reliant on constant praise and attention to reinforce their self-esteem. As a result, those with narcissistic personality disorder are usually overly sensitive to criticism, which is often viewed as a personal attack.

The Day the World Stood Still

The Website below is a FACTUAL accounting of the TRUTH.

“Dennis Thomas, CPA is my personal accountant and has singlehandedly been reversing the damage done to me by having money managers that have had less than my best interests in mind…”

Reigning Olympic long jump champion Tianna Bartoletta has hit out at her own sponsor Nike after their response to Mary Cain’s allegations of abuse under the regime of disgraced coach Alberto Salazar.

Taking to her personal blog, fellow American Bartoletta criticized the partial apology offered to middle-distance runner Cain, who alleged physical and emotional abuse, saying “it hasn’t been a good media year for my main sponsor. I applaud Mary for ‘getting out’ even if for a moment she wanted back in.

“What I didn’t expect to see in the published statement was the seemingly harmless line about Mary Cain wanting to return to the Oregon Project and how she didn’t raise any of those concerns when she was looking to return.”

Writing on tiannabee.com, she said: “That line released in the statement by Nike, ignores how abuse and its victims operate. It ignores the fact that not only do abuse victims often stay with their abusers, it also ignores the phenomena that some victims return after leaving.”

Bartoletta comparedCain’s suffering to her own experience in divorce courts saying: “Alberto apologises but not really because his apology featured the words ‘if’ and ‘maybe’. But I expected that from him.”

The Olympic champion, 34, described the statement as “f***** up” for including that line to try and discredit Cain’s story, then added: “That line was included as if to say, ‘if it was as bad as you say why did you want back in’?”

Alberto Salazar is facing yet more criticism (AP News). Cain, who first trained under Salazar as a 16-year-old, has said she stopped having periods for three years and as a result of osteoporosis broke five bones. She even became suicidal as a result.

“Tired of logging onto twitter and Facebook for my hourly dose of validation, and tired of smiling when I carried my depression around with me like a favorite purse.”
Fullscreen Mode

What Is an Enabler?
11 Ways to Recognize One

The Mental Health Information below is FACTUAL and derived from professional sources.

“Before 2012 I used social media to share my entire misguided life with the world. During 2012 we decided to take a step back and dedicate the time that I was wasting online to perfecting my lifestyle in order to achieve the goals that I wanted…”

IN THE CIRCUIT COURT OF THE THIRTEENTH JUDICIAL CIRCUIT IN AND FOR HILLSBOROUGH COUNTY, FLORIDA
FAMILY DIVISION
CASE NO.   2017-DR-007092

Tianna Bartoletta REVEALS the TRUTH, at her deposition, On November 15, 2018

IN THE CIRCUIT COURT OF THE THIRTEENTH JUDICIAL CIRCUIT IN AND FOR HILLSBOROUGH COUNTY, FLORIDA
FAMILY DIVISION
CASE NO.   2017-DR-007092

Tianna Bartoletta REVEALS the TRUTH, at her deposition, On November 15, 2018

IN THE CIRCUIT COURT OF THE THIRTEENTH JUDICIAL CIRCUIT IN AND FOR HILLSBOROUGH COUNTY, FLORIDA
CASE NO.   18-CA-011011

IN THE CIRCUIT COURT OF THE THIRTEENTH JUDICIAL CIRCUIT OF THE STATE OF FLORIDA,  IN AND FOR HILLSBOROUGH COUNTY, FLORIDA CIVIL DIVISION CASE NO.   129630998

WHAT ARE THE Traits of a
Pathological Liar

A Pathological Liar is a person who lies compulsively usually for no external gain or benefit and often with detrimental consequences.

Some lies seem to be told in order to make the pathological liar appear the hero, or to gain acceptance or sympathy, while there is seemingly nothing to be gained from their lies.

The 5 traits of a Pathological Liar