We CANNOT make this up. Tianna actually wrote another BLOG last night from Oslo, Norway where she ran the 100 meter, took DEAD last and ran 11.51. 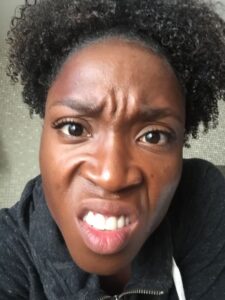 This woman and her BOYFRIEND just won’t quit. What you’re about to read is INSANE and VALIDATES the information documented throughout this site.

Tianna is ANGRY that Nike will not use her in commercials, print ad’s or showcase her as a Nike Brand Athlete

all i ever wanted, all it's ever been

Quarantined in Oslo, Norway…alone with my thoughts. And I think maybe I’m ready to talk about it now.

Earn a scholarship, get out of Ohio…

And then somewhere along the line track and field stopped being something I did, or leveraged—and became who I was.

And so each medal was self-validation, each defeat I took personally as a sign that I was undeserving of good things.

Borderline Personality – Symptom 1
Chronic feelings of emptiness. People with BPD often talk about feeling empty, as if there’s a hole or a void inside them. At the extreme, you may feel as if you’re “nothing” or “nobody.” Nothing feels truly satisfying

I know, extreme. And kind of dramatic.

But I kept getting that warped thinking validated by my contracts, by my meet opportunities, within my relationships, with my coaches- from everywhere.

Borderline Personality – Symptom 2
Unclear or shifting self-image. When you have BPD, your sense of self is typically unstable. Sometimes you may feel good about yourself, but other times you hate yourself, or even view yourself as evil. You probably don’t have a clear idea of who you are or what you want in life.

So imagine my surprise when I throw the Grenade to undo all that– to sever those ties and approach the sport differently only to find that I’m physically NOT able to make a go of it.

Borderline Personality – Symptom 3
Unstable relationships. People with BPD tend to have relationships that are intense and short-lived. You may fall in love quickly, believing that each new person is the one who will make you feel whole, only to be quickly disappointed. Your relationships either seem perfect or horrible, without any middle ground. Your lovers, friends, or family members may feel like they have emotional whiplash as a result of your rapid swings from idealization to devaluation, anger, and hate.

And then I decide okay….I don’t want to go gently into the dark night and I fight my way back to physical health probably worked harder and more intentionally than I ever have in my life…with my most mentally stable and healthy mindset only to  Fail. Epically. Royally.

And, honestly that shit happens. I lose all the time. But not like that, not usually when it matters, and not after so much work.

And I didn’t know what to make of it. And what’s more, shortly after my second failure at these 2021 Trials. Someone decided to send Chuck these messages about me and my performance and by extension his performance as a coach: 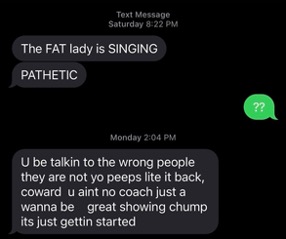 And then, a former coach of mine decided it was the perfect time to kick me while I was down and called Chuck to share some BS about me that he knew would get passed along to me and knock me down a few more pegs.

And then another so called friend of Chuck’s decided to forward him an Instagram post of world 1 league where they completely overlooked me in the field, even though I was the reigning Olympic Champion in the event. His so called friend decided to troll us both by saying “they weren’t wrong” to leave me out, to exclude me all together.

Narcissistic Personality Disorder – Symptoms People with narcissistic personality disorder are typically described as arrogant, conceited, self-centered, and haughty. Haughty: Blatantly and disdainfully proud. Having or showing an attitude of superiority and contempt for people or things perceived to be inferior

I’m not sure at what point I pissed all of these people off enough to make them mock and troll us but I hope that their lack of empathy and/or compassion towards me, this journey, and this work means they have a tremendous well with which they deal with their own athletes who (I guarantee) will not always win, even as they do all the right things in the lead up.

IN THE WORDS OF TIANNA, ARE YOU EFFING KIDDING ME… READ HER EFFING BOOK, EFFING BLOGS, EFFING POSTS…

I wanted to crawl into a hole and die after the 100.

Borderline Personality – Symptom 1 – Repeated from earlier
Chronic feelings of emptiness. People with BPD often talk about feeling empty, as if there’s a hole or a void inside them. At the extreme, you may feel as if you’re “nothing” or “nobody.” Nothing feels truly satisfying
I wanted to walk off the edge of a cliff after the long jump.
Bipolar Personality Disorder – Symptom 1 – Repeated from earlier
One of seven key signs of depression related to bipolar: Thinking about or attempting suicide, or having a preoccupation with death.

I couldn’t read another message about being an inspiration or role model…or how I’m “still” someone’s favorite.

If I’ve showed you anything it’s that hard work doesn’t always pay off. And the fucked up part about that is that you can’t know that until the work is done and you’re in the shit.

And so the outcome can’t actually be the reason you do the work. Because you can’t know it. Until you do.

Another person commented that I cared more about being chiseled than winning.

Please, tell me more about what this takes from your keyboard…I’m all ears.

WE ARE ABOUT TO VOMIT!!

SOMEBODY GET HER SOME HELP AND INTO THERAPY!!!

Read the rest of this garbage below if you want…

But here’s what I’d hope people following me would understand. As much as I love to win, freedom is the MOST important thing to me. And I don’t have it yet. (Read my memoir, you’d understand)

I thought track and field would be my fast track (pun intended) to the life and freedom I’ve been working toward. Specifically I thought THIS season would be that for me.

I’m not a bad person for leaving a bad marriage.

I’ve been working at getting back on my feet for four years and it feels fucking impossible.

I’m not a shit human being for leaving a coach I was successful with in an environment that made me miserable.

I was dying in December and I got all the way back to a place where I could train again.

I was overweight in January and lost the 15 pounds I needed to be competitive.

I haven’t jumped well since 2017 but even as I’m a fucking shadow of my old jumping self I jumped farther than I have in three years.

This was the first trials in 13 years that I had my family with me AS MY FAMILY. we’d been estranged for all of Olympic teams and medals.

The first time my nephew got to too.

And that was the experience I gave them. Those losses. My disappointment, and heartbreak. After all this time, all this work.

I’ve not made Olympic teams before, it hurts but it passes.

And sometimes you’ve gotta process it, or make sense of it so you can move on.

So here’s the takeaway in my attempt to do that: two opposing things can be true

No effort is wasted

And since I truly believe the first statement (no effort is wasted) I’ve gotta stick around and find out what the fuck this effort was all for then. Because damn it it was for something. Apparently, not this. And that has to be okay now. Because what’s done is done. Everything is as it should be.

And so I do what I always do, what I’ve made a life of doing

Get back up. Find a way.

Because all I’ve ever wanted was to live freely. All track’s ever been was my means to do that…

But maybe just maybe I’ve been thinking too small and I’m wrong about that too.